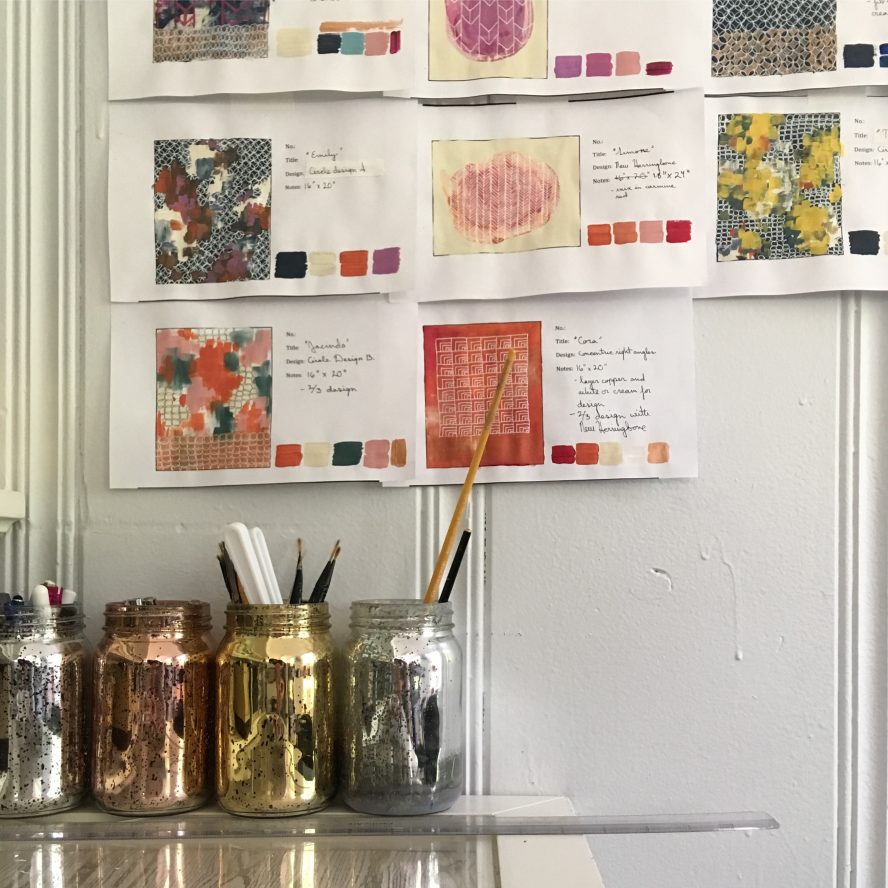 I’ve been thinking a lot lately about creativity, failure, and moving forward. God has led me to reshape the way of think of and respond to a failed idea. Here’s why:

I had big ideas for summer. I wanted to paint a 12-piece collection full of vibrant, summer colors and build on textures and patterns from my recently finished spring collection. Despite all the stereotypes of creatives, I’m a big fan of goal-setting, list-making, and box-checking. In my mind, that’s how things get done. I love a well-formulated plan with actionable steps. (All of this has also led me to consider the fine line between formulating a great plan and over-thinking an idea.) I spent more than a week working on scaled-down mockups and meticulously mixing custom paint colors for the new collection. After mapping out everything I saw in my head on 8.5×11 office paper and taping them to my studio wall, I stared at them for a long time, and then… I dove in! I prepped canvases, painted basecoats, and measured out grid lines for patterns. But no sooner were things beginning to take shape than I realized I had very limited time to finish things before leaving for summer missions trips in Jamaica and rural Tennessee, and I realized all of my concepts were ridiculously complex. I eventually had to come to terms with putting my ideas on hold, knowing I could sort them out and rework them when I returned from my travels.

Six weeks later, back home, sitting in my studio, total creative block set in. Here were these 12 ideas – some as much as 50% finished – all seeming to have literally and figuratively collected dust while I was away. Shriveled-up, dry, dead – that’s how they seemed to me. And, perfectionist that I am, I would have rather done anything (organize my closet, deep clean my bathroom, meal plan for the rest of eternity) than sit in studio and figure things out, face-to-face with “failure.” Why? Because if I “failed” at something it means I wasn’t good enough at it to finish it, let alone finish it well.

When it came down to it, realistically, I had two options. (Giving up on art entirely is never a realistic option, although it crosses my mind occasionally, to be honest.) Option 1 was to be very wasteful: I could throw out those 12 ideas, the dusty, barely started canvases, and the numerous to-go containers full of painstakingly mixed paint and attempted a clean break, not being any the wiser. Or, Option 2 was to be resourceful: I could repurpose what I’d started and intentionally reshape my idea of failure, choosing to see it as an opportunity to move forward and do so with new knowledge and experience. I could choose to see those 12 potential paintings as “failures” to be avoided OR as stepping-stones from not-so-great ideas that had to be edited out to better ideas that can materialize in the future.

I chose Option 2. Those potential pieces could have held me back but I chose to paint over the canvases, tweak the paint colors for fall, and move on. And I’m moving on with a better idea of what works and what doesn’t. Good design > complex.

And you know what? I did end up finishing FOUR of those 12 pieces – three of which I hate and one I love. The one I love doesn’t look much like the original mockup I made back in May, but it evolved into something better and eventually sparked ideas for my fall abstract collection that will debut in November 2018.

I have come to the conclusion that something is only a true creative “failure” if you let it completely kill your momentum. Move forward from it, and it’s a step towards success. And that’s a win in my book.